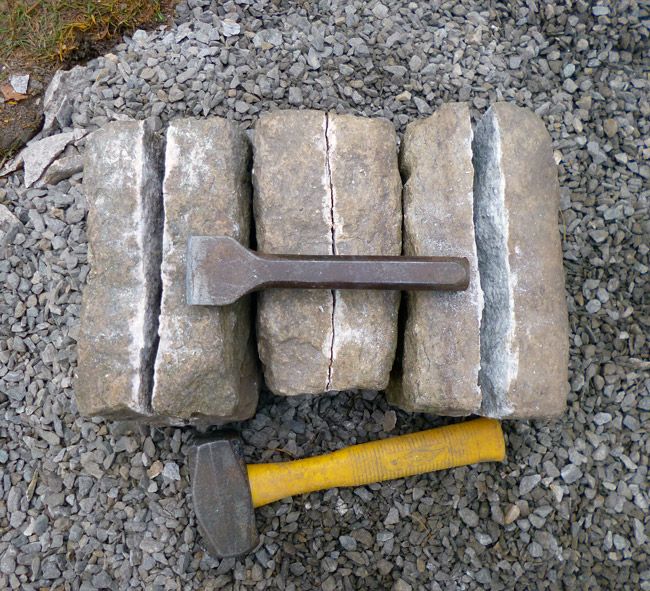 Have you heard the parable of the stonecutters?

This is one of my favourite parables/stories because it speaks of purpose and passion in a very simple to understand way. If you’ve not heard the parable before, let me relay it briefly. There are three stonecutters doing the same, back breaking, tedious, difficult work of cutting stone. This is not an easy job. There’s no air conditioning. There’s no power tools. There is simply you, a chisel, and stone. Imagine the effort, the heat… the day after day effort of doing the same thing, over and over again.

Each man is doing the same work, putting in the same effort. The first man is clearly there for the sake of the job -- he does what he needs to do to collect the money he is going to be paid. This man had a job.

The second man sees a little further than the work itself. While he’s not laying the stone in the wall, he knows the purpose for which he works. He knows what his work contributes to. This man had a career.

The third man, however, saw beyond the work of his hands and even where the stone he was cutting would be laid. He saw the big picture, he saw the end result. This man, although he was doing the same work as the others, had been inspired with a vision. This man had a calling.

I imagine each man also had a different response to the work. When all you see is the stone, with no idea of its place, perhaps the finished product doesn’t matter so much. After all, you’re given the dimensions, you know how big to make the pieces, but what happens after that doesn’t really matter. I expect this man wasn’t so precise in the work he was doing. Maybe he took shortcuts just to get the job done quicker. Maybe it didn’t matter to him if a cut wasn’t perfect or the size was slightly off. After all, what difference did it make? He was simply there to do a job.

The second probably took a little more pride in his work. After all, he knew someone else after him would take the stone he cut and would fit it into the wall. Maybe his measurements were more precise, the cuts smoother to ensure the pieces fit together. He knew what the stone was for and he knew they would have to fit well together. Perhaps he took a bit more care to roughen the edges of the stone so the grout would hold the pieces together better. At any rate, he knew the project, the work, was bigger than just the stone he was cutting in the moment and I imagine his effort rose with that belief.

The third man, however, looked at his work in an entirely different light. This man knew he was doing more than just cutting stone, knew he was contributing to something grander than just a wall. This man I imagine putting in the time and effort to make sure the stone was cut to perfection… every piece just so. Whether this stone he was cutting would be used for a wall or a buttress or the floor, it didn’t matter. He cut it to exact dimensions, he ensured each piece was beautiful. He wasn’t building a simple building or a road, he was building something grand and majestic and he put in the time, patience, effort, and all of his skill because he knew he was contributing to something great, something that would survive him, something that would benefit many people and be admired by them. I imagine this man put his heart and soul into it and would accept nothing less than precision because what he was helping make would be incredible -- beyond what one man could make himself. He was a part of it, he contributed to it, his pieces helped make this cathedral a masterpiece.

This story came to my mind as I was watching my garage get constructed this week. The first crew that came in to pour the cement were an interesting bunch. They showed up to do the work, usually late. They came and dug out where the concrete pad would sit one day. Two days later they framed it. The next day they poured the concrete. A week and a half later they came and dug out the sidewalk in the backyard, which was meant to be 3’ across yet they used a 6’ skid steer to dig out the path. And tore the lawn to pieces while they did it. Then tore up the driveway so badly that they needed to replace the gravel. And left a pile of dirt that still needs to be removed.

They framed up the sidewalk and apron to the garage four days ago. They were meant to have the concrete done before the garage was framed. They guaranteed they would be here yesterday, the day the framing was to start.

One could arguably say they were doing the job they were paid to do. But they were careless. They didn’t respect the property they were on. They left nails in the alley, empty water bottles and orange peels on my deck, nails in the yard. This crew was the first man. They did their job, technically (I do, after all, have concrete in place). Because they chose an expedient way to do the work, they ended up having to replace the gravel on a perfectly good driveway; I imagine that ate into their profits due to the cost of the gravel and the time to lay it out.

The framing crew, however, are a different class. They were here this morning before I was even awake and had the side walls framed by the time I realized they were here. They worked fast, but with precision. They knew what needed to be done and in what order, and they did it well. When I knew the framing was going to happen yesterday, I expected the frame alone to be done. Yet the walls, trusses, and roof are complete. Obviously there is siding, drywall, insulation, electrical, and much more that needs to be done but these four fellows measured twice and cut once, worked together to get this raised, and at the end of the day I was very much impressed.

Oh, I should also mention that they did it in 35C weather and in poor air quality conditions due to wildfires a province over (you can taste the smoke on the air and feel the irritants on your eyes). And after a long day in these conditions? Before they even drank any of the ice water I brought out for them as they were packing up, they cleaned the workplace so it was spotless. Picked up the garbage, moved discarded pieces out of the way. The left the site cleaner than they found it.

The way these two crews approached their work were vastly different. They both had jobs to do and arguably they both did it. One at additional cost (someone’s going to pay for the lawn they tore up!) and one being methodical, precise, and diligent. The first crew did their job. The second crew, perhaps they recognized this as their career and were willing to do the exceptional work. I don’t know for certain if they think building homes or garages is their calling, but their approach to the work stands in stark contrast to the first crew. To one I’m grateful they did their job, although I certainly would have liked it to be better, but to the second I’m pleased with their work. Would I recommend the first crew? Probably not. The second? Absolutely.

If you’ve made it this far you’re probably wondering what the point is. Maybe you see it already, maybe not. It does make me wonder if we simply show up to do the job, one thing, at a time. Or are we taking this work and using it to hone our craft, to become increasingly better so that we can see the vision, the cathedral, built through our efforts and labour? Do we see the purpose to our work, the change to the world we strive to make?

Connecting purpose to the work is important. Purpose is what allows you to see the big picture, the vision for the work being done, no matter what role you play in the process. Without that purpose, without that vision, you never see beyond the task at hand which means missing the grandeur of what is being built. In fact it robs you of that connection to the bigger picture -- it robs you of inspiration, it robs you of ownership, it robs you of feeling that you are a part of something bigger than you are.

We are all a part of something bigger than we are. The whole is always greater than the sum of its parts.