I've been collecting tattoos for 20 years. In that time, Angela has never gotten a tattoo. Her sisters and her brother all have, but she was the last of the great holdouts. I'm pleased to announce that as of January 29th, that is no longer the case! Angela has lost her tattoo virginity. And I couldn't be prouder. =)

For one, she handled it like a trooper. She went for 5.5hrs without a break for her first tattoo. 5.5hrs. I know a lot of guys, with a lot of tattoos themselves, that can't hack that. Heck, yesterday I was in for 5.5hrs and that last half hour was pretty bad. She says she could have kept going. I believe her... I came home like a wuss last night after my 5.5hrs, she came home and was just hungry.

So I'd like to publicly state that those who mocked and jested and said she couldn't do it (there were quite a few, most predominantly some family whom I am happy to say are properly shamed because she smoked any of their sessions and in one fell swoop may have surpassed most of them in sheer ink volume) were so completely and utterly wrong that I chuckle whenever I think about it. I knew she could do it, because my wife is tough -- except when I'm around so as to play me, I'm sure.

Anyways, that is much more exciting than what I did yesterday (I also did 5.5hrs, and my second sleeve is almost complete!). Pictures of both to come shortly. And pictures of my last session too. 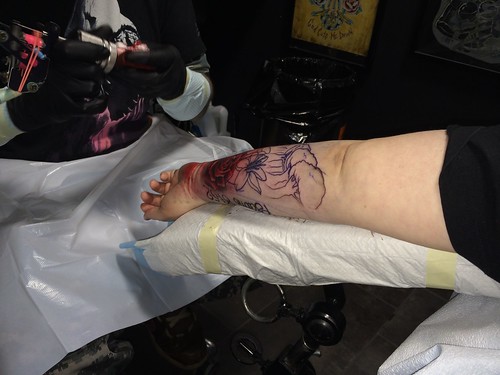 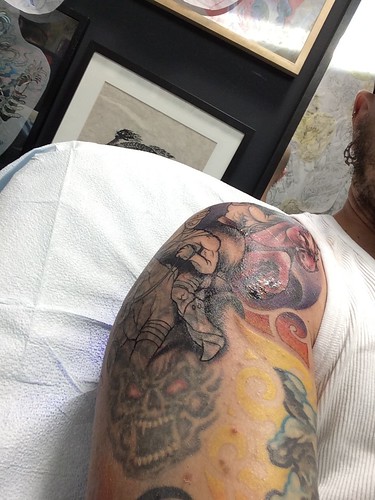