So my Flickr account now has pictures of my new in-progress sleeve. The first session was just the line work and that was done on July 18th and took 5hrs. Sessions 2 and 3 added color; session 2 was done this past Monday (the 17th of August) and took 6.5hrs, and session 3 was done yesterday (Saturday, the 22nd of August) and was 3.5hrs. I think it looks pretty sharp. I didn't get pics of just session 2's work, but that was mostly the vine creature and the dragon and the background on the lower forearm. Session 3 was the nebula in the "ditch" (which wasn't as bad as I thought it would be but it bruised fast), finished off the dragon (the horns and eyes and some of the body), and also one missing bit on the inside wrist (I will tell you, the wrist is the worst). 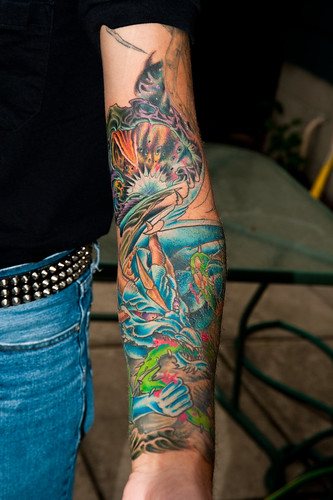 So now half the tattoo itches like crazy, and part of it burns. Tomorrow the new stuff shouldn't feel so tight anymore... then the itching will come. =)

Looking forward to hopefully getting the rest of the lower forearm done this coming Saturday (would have done more yesterday except there was a big tattoo show in Edmonton this weekend so the arm rests were at the show so we did all we could without it, but since I'm not a contortionist there was quite a bit we couldn't do). Then it's about 2 weeks off before doing some more work on the various nebula ideas we've got for the rest of the upper arm.

I'm really impressed with the results. I've found my permanent guy... if anyone in Edmonton is looking for a really really good tattoo artist, check out Jared at Crimson Empire. He did the "J" on the back of my neck and my forearm and I'm severely impressed with his work. Couldn't have asked for a better guy to do it.